Sorry for the delay here.. it's been quite a busy week since returning from our trip.  It was not the greatest feeling leaving warm and exciting Las Vegas for chilly and mundane Indiana.  Our last two days were enjoyable, but as we came to realize, you can't truly do Vegas on a budget.  It just doesn't work that way.  Prime example number 1: our dinner immediately following our arrival, which I will get to soon enough.

After a very sluggish morning that required a few Excedrin, we gave ourselves a bit more time to rest up by staying until the Pens game was over at 2:00. Unfortunately, that was practically over half way through the second period.  They were playing sloppy as hell.  Once everything was packed, we said our "thank yous" and "goodbyes" and reluctantly headed back out on the road.  We were Vegas bound again.  The first hour or so was mildly entertaining, as we wound through grassy hills, once again, and drove over secluded lakes.

After driving through the first 40 miles section of hills, we were back into a large valley of farms, orange groves and little Mexican villages.  To keep ourselves entertained, we made fun of every song playing on one of those "Today's Hits!" radio stations.. you know, the ones that play the same 20 crappy songs repeatedly for weeks, until hearing one of them again makes you want to punch out your window.  I seriously don't understand the hype of mainstream music, sometimes.  I mean, Avril Lavigne's new single, the one we really got a kick out of, is basically about how she just wants to be a floozy; a far cry from her "Skater Boy" days.  Anyways, we continued through the valley looking for the San Andreas fault line, which we somehow missed.  Figured there would have been at least a sign, let alone a gigantic crease across the soil.  Another set of small hills laid between us and the desolate desert of the southwest and in those hills, the largest concentration of windmills I have ever seen:


We entered the Mojave Desert area, where all gas was >$4.00 per gallon, just as the sun set.  Thank goodness we had filled up already.  The rest of the drive was spent staring into the uninhabited blackness, until the lights of Las Vegas peaked their glistening head around from the hills.

Now here's where we get to that pathetic excuse of a meal.  We ended our first night pretty early by Vegas standards, so around 1 am.  We arrived a little exhausted from being on the road again, so for dinner we went bargain hunting next door to the hotel, at a place called Ellis Island Brewery.  The main attraction: a $7.99 10 oz. steak dinner.  Let me just start off by saying that their placemats are covered with lies, mainly the large one at the bottom: 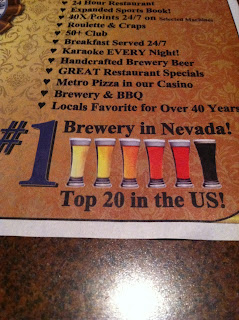 Their beer was mediocre at best, and the food was.. not even sure horrendous would cover how bad the food was.  My steak was charred beyond being edible on half of it and it was under-seasoned.  The green beans were a bit chewy and the baked potato was, well, a baked potato.  It's hard to screw that one up.  Now, Dan's meal was so bad that he didn't take more than a few bites.  His "Fried Chicken" was a flattened, over-breaded slab of chicken that came out dry and doused in out-of-the-can gravy.  His mixed vegetables were, as we put it, "a Jolly Green Giant Veggie Medley".  The volcano of mashed potatoes looked like it would solidify if left untouched much longer.  You get what you pay for.  Lesson learned.

Our agenda was quite full the following day.  The foodie in me was excited about our plans to eat at two of the restaurants from the Man vs. Food episode shot in Vegas. Our first stop was Hash House A Go-Go.  We waited for about 40 minutes to be seated, mainly due to the praises of the people around us also waiting.  Our stomachs continued to grumble as we anxiously awaited.  The constant views of waiters balancing outrageously large and delicious looking plates of food probably didn't help either.  Just as we were about to give up, we were seated.. outside in the beautiful weather, nonetheless.  Sure glad we stuck around, too.  The shining sun called for a large Bloody Mary.. about the healthiest way you can incorporate booze into a drink.  Of course, I followed this by ordering their signature Sage Fried Chicken and Waffles.  Judging by the multiple plates I saw exit the kitchen as we waited, I knew I would not be consuming this meal in one sitting.  I was still shocked at the size of this eclectic dish when it was placed in front of me with a loud thud, further illustrating the size of this monster meal.  The four Belgian waffles were studded with a strip of bacon, then topped with two pieces of sage fried chicken, covered in fried leeks and surrounded with a maple syrup reduction.. all of this held together by a large steak knife.  The portion was the largest I have ever seen, and yet, it still managed to pull-off an impressive presentation.  It was not elegant by any means; more a Salvador Dali-like culinary masterpiece for the everyday food junkie.  The taste was unique, as well.  The sage fried chicken was unlike any fried chicken I've ever had.. probably because I've never had fried chicken whose main spice component is sage, which is much more floral and earthy than the traditional seasoning.  The waffles were 1) studded with bacon, and 2) light and sweet, both of which were a surprise.  The crispy leeks added to the texture of the whole dish and the maple syrup reduction brought a roasted/caramelized note without weighing it down.  Can you tell I'm becoming quite the foodie?

After resting off our meal in the hotel room for a bit, we ventured out to the Strip once again, this time in search for a $5 minimum Blackjack or Let It Ride table.  After grabbing the best drink deal in Vegas, in my opinion (the Spanish Steps Lemonade at the Bicardi booth outside of Caesar's Palace.. $8.50 for 24 oz of knockout power), we ventured southward and finally found a table at Excalibur.  I stayed here with my Dad on my first visit last January and won a about $300.  This time around, not so lucky.  I played only 12 hands of Let It Ride, winning only one hand and losing $51 in about 30 minutes.

We continued on back up the strip, stopping for a ride on the roller coaster at New York, New York.  Fun, yes, but not worth the $14 fee if you have been to Cedar Point as many times as I have.  We decided that we would stick to the strip for dinner and chose the Cabo Wabo Cantina due to it's prime location and outside seating.

After some moderately good Tex-Mex food and quality people watching on Las Vegas Boulevard, made it back to the hotel for some more affordable gambling.. not that that makes any sense, especially since we lost money there, too.  Despite hitting five blackjacks in maybe 30 minutes, I still stepped away from the table down $20.  We capped the night off with another walk up the strip, trying to dodge the slightly depressing realization that we would be home again tomorrow.

After checking out of the hotel and returning the rental (such a relief to return it undamaged after 1700 miles of driving), we arrived at the terminal 4.5 hours before our flight.  Lesson of the day: you can't check your bags until 4 hours before your flight.  After making it through security, we spent the next 4 hours posted up at a charging station on our computers and grabbing a quick lunch.  Our gate location allowed us one last view of Las Vegas before boarding the plane.. we were heading home.