The Days in So Cal

The first morning in Lompoc was accompanied by a well-balanced mix of nervousness and excitement.  I didn't feel near as focused going into my meetings at UCSB as I did my meetings at Utah.  I felt more confident, but something was still a little off.. like I had a feeling that the meetings weren't going to go as well; a pretty accurate feeling considering how well things went at Utah.  I took my time getting ready, hoping that I could find some focus.  My pace switched to frantic when I realized that it took 50 minutes to get to Santa Barbara, not 30 minutes.  Naturally, I realized this at 11:15 and my meeting was scheduled for noon.  I quickly gathered everything I needed, including a change of clothes for the beach, and jumped in the car.  To add to the frustration, I forgot my sunglasses at the apartment.  (I just purchased these sunglasses, some Ray-Ban Wayfarers, for the trip and am in love with them)As much as that annoyed me, it gave me the realization that I was ready for the meetings when I found it more frustrating to be without my sunglasses than being late.  About 10 minutes into the drive, I opened my laptop bag to get something, can't remember what now, and the day turned around completely.  There were my forgotten sunglasses. Score!  Now, I sat back, took in the warm breeze blowing through the open windows, and just.. relaxed.

The drive to Santa Barbara was a thing of beauty.  The first half cut through the grassy hills, covered with grazing cattle and the occasional swaying tree.  I thought, no wonder those commercials always said that "happy cows come from California."  It's hard not to be happy with that landscape.  Sorry, I have to inject a bit of humor here:


The last half of the drive followed the coast; talk about relaxing.  Aside from the oil platforms, which I had no idea existed that close to the Cali coast, the view was spectacular.  The winds came roaring off the hillside towards the ocean, bringing a smell that reminded me of Spring (my favorite season).  Oh yeah, I forgot it's practically Spring year-round out here.

We arrived at UCSB about 20 minutes late.  Thankfully, I made a call ahead, encountering a very rude secretary in the process, to let them know I would be late.  Not a good first impression, but I guess that makes us even.  Walking through the campus, I immediately noticed how differently it was set up compared to Ball State's campus.  While there were multiple large buildings, most of them were just for laboratories and offices.  The classrooms were accessible from outside, separate from the other buildings.  Can't keep those Californians away from the sun too long.  The amount of students using bikes and skateboards to get to class damn near outnumbered the number of students walking to class, another extreme difference from Ball State.  Students at Ball State, at least those traveling by foot, always seem to get annoyed with people on bikes.  Taking a skateboard to class is such a rarity that I can't even draw a comparison.

I found my first office, where I was meeting with Dr. Mike Goodchild, a professor regarded as one of the most cited geographers in the last few decades.  A bit intimidating? Yeah, maybe a little, but I approached it with the utmost confidence.  Goodchild was a very laid-back, well-spoken man, with a sophisticated, yet humble demeanor.  Our conversation lasted about 30 minutes, about half the time spent at each of my meetings at Utah.  About midway through the conversation, while discussing where our interests aligned, he informed me that he was not taking on any graduate students because he has decided to retire come June 2012.  Noticing that I seemed slightly defeated, he suggested multiple professors that I should talk to while I'm here, shortly followed by telling me that 2 of them were actually out of the country at the moment.  Well, that sure helps me a lot.  I thanked him for his time and headed straight for another prof's office, Dr. Clarke.  He didn't know I was coming, but he was kind enough to offer me some of his time.  Low and behold, though, he hadn't even seen my application.  I sold myself as best as I could and inquired about their selection process.  To little surprise, they were well along in the process.  In fact, the department had already invited their top choices out to Santa Barbara for an open house the weekend prior. Dr. Clarke proceeded to tell me that, with two professors not accepting any students for the coming year, spots were more limited.  Also, they had received numerous applicants from top universities in China, Vietnam, and South Korea, many of which had perfect test scores.  Go figure.  As I made my way back out of the building, I had a feeling that it would be the only time I'd be doing so.  Not that I'm giving up on the UCSB dream, but I sensed that I wasn't as desired there as I was at Utah.  The vibe from the somewhat segregated department seemed a little off-putting, as well.  I mulled it over for a few minutes as I wandered aimlessly through campus, and then simply moved it to the back of my mind and focused my attention on the rest of my trip.  Now entering beach mode..

After a quick wardrobe change (including shorts for the first time this trip!), we made our way to the pier in Santa Barbara.  We had been craving seafood for a while, so headed to a place called Brophy Bros., which overlooked the marina and sat next to the local yacht club.  Dan had the crab legs, while I ordered the Garlic Baked Clams.

These things were delicious.  Not overloaded with garlic, with a hidden surprise of crispy bacon and accompanied with a fresh squeeze of lemon juice; these things were perfect.  My only complaint was that there were only 6 of these bad boys to consume.. man, I wish I could get oysters like this back in Indiana.  I washed it down with a cold local beer that seems to be popular out here (and tasty, too), the Firestone-Walker DBA.

After our lunch, we wandered around the marina for a bit before heading to the beach.

Finally, I would get the chance to put my feet in the Pacific Ocean for the first time.  The sand was thick and cool to the touch, but still induced the euphoric feeling of freedom.  As expected (thanks to my many climatology courses that covered ocean currents), the water had an icy crispness to it that sent chills of joy up my body.  Naturally, I was sure to document the experience:


You can't tell me that doesn't just make you say, "Ahhh."
I waded in the water to the level of about halfway up my calves, ignoring the goosebumps that were forming and just taking it all in.  Another item to scratch up off my bucket list.

We left the beach and headed back to Lompoc (yes, I got to enjoy the scenic drive, once again) to meet up with Ricky, Katie and Mike and head out for a bit.  We walked a few blocks away from the apartment to a place in town called The Red Zone, where two girls, in the Air Force with Ricky and Mike, met up with us.  Now about this restaurant.. the decor looked like the owner went to one of those sports memorabilia stores in the mall and bought everything that was on clearance.  That's the only way I can describe it.  It was quite comical, actually, looking at sports items on the wall, that ranged from some Kobe photos (which makes sense) to pennants of midwest collegiate teams and a photo of Mike Ditka.  We enjoyed the typical bar food as the Lakers-Heat game wrapped up.  I honestly would have been fine if the roof collapsed on that game.  Being a Celtics fan, I have a pure hatred for the Lakers and, more recently, the Miami Heat.

When we got back to the apartment, one of the girls who had joined us for dinner had the brilliant idea to use Ricky's money, which he willingly gave her, to buy Just Dance 2 for the Wii.  I was stunned that we were about to play this game. I'll stop at saying that somewhere out there, there is video evidence of Dan and I in a dance battle in Ricky's living room.  Needless to say, that was short-lived.  We had gone back to bowling for a while when I looked at my updated Twitter feed. There I noticed multiple tweets mentioning an earthquake that had just happened off the coast of Japan, originally estimated at an 8.8 magnitude.  We quickly switch the TV to MSNBC, just in time to catch a live feed of the tsunami crashing inland, sweeping away cars and entire villages in the process.  It really was shocking to watch.  The entire time, all I could think about was if that had happened here, in California.  Just on the other side of the Pacific Plate.  We watched on for another hour, as update after update kept pouring in.  I was the last one to go to bed, so I was still awake when I noticed that Lompoc had been place under a Tsunami Warning.  I couldn't believe my eyes.  Just as I noticed this, I received two texts from friends telling me the same thing (thanks for looking out, by the way).  As I finally fell asleep, all I could wonder was, "I wonder how large it will be" and "damn, tomorrow is our beach day, I sure hope they aren't closed."

We awoke to the news of 11 foot tsunami waves in Hawaii and 7 foot waves to our north in Pismo Beach.  Knowing that the beaches were going to be closed, at least for the morning, we slept in for the first time in the whole trip.  Dan and I spent most of the around Lompoc, grabbing lunch and waiting for the night to arrive.  We had big plans for the night: Ricky's band was playing a show at the Velvet Jones in Santa Barbara, a pretty legit venue.  We arrived "with the band" at the back of the venue and helped them unload.  Their band, Primal Tribe, was the second to play, which was a nice change from the screamo band that played first.  I didn't realize how many photos and videos I took of their set until the next morning (Jager might have had something to do with that).  I'll post a few pictures and a video just so you get a taste: 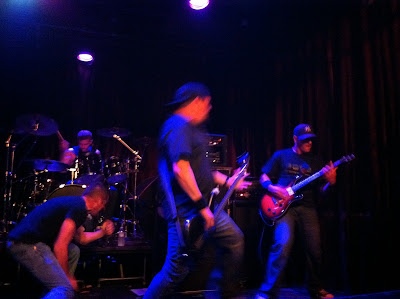 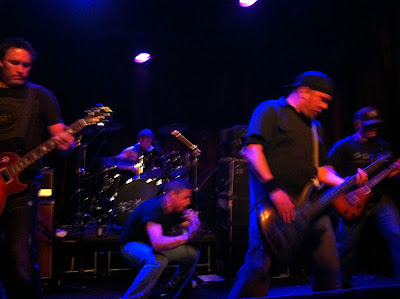 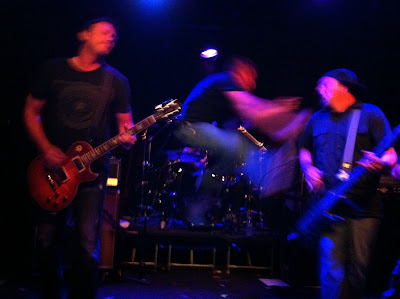 All-in-all, it was a fantastic end to our stay in So Cal.