The Diversity of America's Landscape

We awoke Tuesday morning to about 6 inches of thick, wet snow all over the ground and cars.  Naturally, we don't have a snow brush, so we had to rely on other tools to clear it off the car.. by that I mean a plastic bag, the large drinkin' cup from the strip in Vegas, and the hotel's snow shovel.


Once we got about 5 miles outside the city, the snowfall diminished completely and the sky cleared up.  This time around, we could actually see the Great Salt Lake.


I can tell you right now, this drive was stunning.  Much more than either of us expected.  We both assumed the drive would be dominated by flat, desert conditions until we reached California.  Instead, we were surrounded by an ever-changing landscape.  There were constantly snow-topped mountains mixed with brush-speckled desert.  We even passed along the southern extent of the Bonneville Salt Flats.  As we pushed westward, the desert was replaced with grassy hills and yet, the jagged mountains still peaked their heads in the distance. 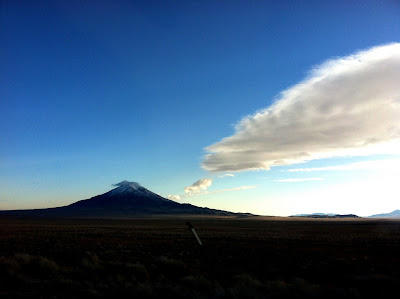 Dan continued to master the drive until I took over (for the first time of the trip) in Reno, just in time to drive through the Sierra Nevada mountains and Lake Tahoe area.  This 2-hour section of driving was covered with steep grade changes, towering snow along the road, and beautiful scenery.


Just outside of Sacramento, Dan took back over.  The stretch from Sacramento to Vallejo was probably the most boring stretch of driving we've had this trip, although the constantly increasing temperature was a nice touch.  As we carved our way through Vallejo and Oakland,  I began to sit up in anticipation of seeing San Francisco for the first time.  All around us were hills littered with colorful houses across from hills of cookie-cutter houses with no yards.  It reminded me of the introduction of one of my favorite primetime television shows (I will use a version that is much less annoying than the original):

We caught glimpses of the city as we inched closer, but didn't get a great view until we crossed the Bay Bridge.  From here, you could see the city, the Golden Gate Bridge, and Alcatraz.  It was amazing.


We reached our shady hotel (the dirtiest of the trip, so far) in the middle of San Francisco way ahead of schedule, so we were able to relax for a bit before venturing out to explore the city.  Our first stop was the Mission District to grab some Mission-style burritos and see the Mission Delores.

After our monstrous, but delicious burritos, we wandered down Valencia to see more of the district, only to turn around and head to the Lower Haight area to grab some beers.  We stopped in at a place called Toronado, a bar that I had heard during my beer geek stage as being the "Mecca of Beer Bars".  Honestly, I will give it points for a good atmosphere, but the Heorot in Muncie has a much greater selection.  After a beer there, we headed back to our hotel.. 16 blocks away.. on foot.  Bad idea, maybe, but it was an enjoyable walk.  We ventured past the "Painted Ladies", which are better known as the houses from the opening segment of Full House.

We eventually made it back to the room, where we passed out pretty quickly.  Not a bad idea, considering the full schedule we had laid out for the morning.

Crashing hard the night before allowed us to wake up early and tackle the long sightseeing list before heading out to Santa Barbara.  I was very happy to get out of our smelly hotel, with its cigarette buds on the floor and shag-carpeted elevator.
First stop on the agenda: find a killer breakfast place.  Being the foodie that I am, equipped with multiple restaurant finding apps on my iPhone, I picked out a place on .  Washington Square called Mama’s.  Name like that pretty much screams good breakfast.  The numerous reviews praising its breakfast goodness, from French toast to eggs benedict done in a multitude of ways, and #5 rating out of some 3000 restaurants on TripAdvisor helped with the decision, of course.  Many reviews mentioned the line that often forms down the block, as the restaurant only seats 40 people or so.  We found a parking garage nearby and walked through the square, full of old Korean men and women centering their chi, or something like that.  To our surprise, there was no line out the door.  Upon entering, a hostess/door man informs us to order our food at the counter and then seat ourselves at one of the few remaining free tables.  As we scoured over the menu, which hung over the counter and open kitchen, I was constantly distracted by the speed and efficiency of the chef and his 2 sous chefs.   Unfortunately, what I wanted, the Dungeness Crab Benedict, was only served on weekend mornings.  Instead, I was forced to devour this delicious creation:
The Swedish Cinnamon French Toast w/ Fresh Seasonal Berries.  It was light and not overly sweet, a task that most French toast dishes fail to accomplish.  The homemade jam at the table was delicious, as well.  The best part: that plate of food was only $9, an impressive feat for being such a popular restaurant in a large city.  Dan was right, though, when he mentioned that we should have ordered some bacon, too.  Some saltiness would’ve worked well with all that sweetness.  With a strong breakfast in us, we headed down to the Fisherman’s Wharf, about 8 blocks to the north; another stop to scratch off the list.  Honestly, it wasn’t exactly what I was expecting.  I was expecting multiple markets selling fresh seafood and full of vendors selling a multitude of fish cooked various ways.  Nope.  Maybe we went to the wrong part of the Wharf because I saw none of that.  We did see one row of vendors selling the same small menu of seafood with no customers.
After walking the various piers, where we enjoyed the views of the Golden Gate Bridge and Alcatraz and practiced our knot-tying skills on exhibits meant for children half our age, we stopped at Ghirardelli Square to buy some chocolate.  Our next stop on the agenda was Buena Vista Café, a small restaurant across the street from the Hyde Street trolley turnaround.  I saw an episode of Best Thing I Ever Ate on the Food Network (my second favorite channel, behind ESPN) a few months back where Tyler Florence recommended the Irish Coffee at Buena Vista Café.  Coffee + Whiskey + fresh cream. Sounds perfect.  It was pretty neat to see made right in front of us by our, no doubt, Irish bartender. (Not my video below)

Our stiff coffee was followed by another item on my bucket list: riding the Hyde Street trolley.  I managed to record our short, mostly uphill jaunt from the Wharf to the well-known Lombard Street.. you know, that pointlessly curvy, brick road amongst a city of straight roads.  It was just as touristy as I had expected, but definitely worth the stop.  It offers a good view of the city’s hilly landscape from the top.  It’s also pretty interesting to watch families in large Astro vans try to navigate.

After snapping a few pictures with my iPhone and then a few of some elderly British tourists with their Nikon DSLR (pure camera envy), we headed back towards the car to begin our trek out of the city.  One thing we noticed while in San Fran is that Dan and I seemed to be the only American tourists around.  We were constantly around people speaking German or broken English.. not complaining, just thought I would point that out.
The next part of our trip was what I was looking forward to the most: driving down the California Coastal Highway.  Let me just tell you this, it didn’t disappoint.  The road literally followed the contour of the coast, offering spectacular views of the untouched beaches below and the jagged coastline ahead.  It was every bit as beautiful as I was expecting.  The highway offers plenty of places to pull over and enjoy the view, which we took advantage of multiple times.  For the first time, I got to hear the peaceful sounds of the Pacific Ocean crashing against the Cliffside.


We stayed on the Coastal Highway until Santa Cruz, where we picked up the 101 instead.  It would’ve been amazing to take the 1 along the coast all the way to Santa Barbara, but it also would have taken 9 or so hours, versus 6 hours taking the 101 the rest of the way.  The remainder of the drive was covered with grassy hills and scattered farms, growing anything from artichokes to citrus.

We got off the highway just outside of Lompoc, where we are staying with Dan’s buddy, Ricky, and enjoyed the drive on a ridiculously curvy road that took us over the hills into Lompoc.  We came out on the city-side of the hills as the sun was setting, which made for quite the scene.  It was an incredible view for someone who is used to coming into cities in the Midwest.  I would have snapped some photos, but I was too busy holding onto the “oh-shit handles” as Dan careened our car through the curves in sport mode.
We arrived to Ricky’s apartment safely and had a tasty chicken pot pie dinner; thanks to the girlfriend for that one.  The rest of the night was filled with Wii Resort Sports and beers.  Not having any long drives on the agenda for the next few days is a relaxing feeling.